Happy BLOG TOUR TUESDAY!!! Today, I bring you some goodies (aka Excerpts) from Penny Reid’s latest and greatest book release: Space! SPOILER ALERT: I loved it! 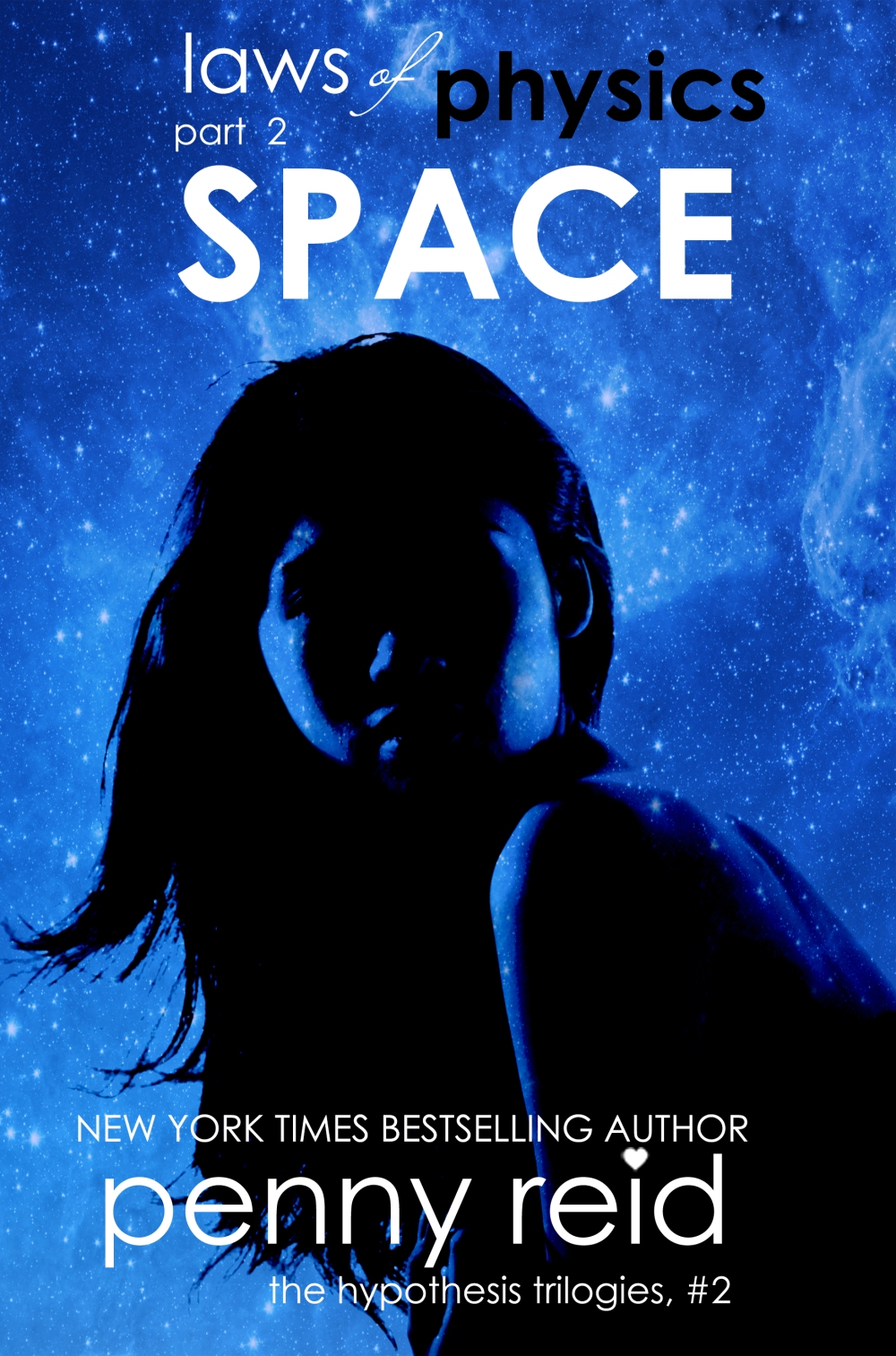 What’s the worst that could happen?

Mona’s meticulously planned allotment of relaxation is thrown into chaos by the unscheduled appearance of her older brother’s band of friends, including the one person she’d hoped to never face again. Abram still makes her feel entirely too much, which is one of the reasons she disappeared after their one week together. But now, trapped on a mountain of snow and things unspoken, Mona will have to find a way to coexist with Abram, chaos and all.

Space solidifies my opinion that the New Adult genre is where Penny Reid shines best.

The book starts out with Penny doing us a solid and finally walking us away from the ledge that cliffhanger put us on. FINALLY, FINALLY we get to know what happened next and boy is it juicy. We meet Mona two and a half years later, a now famous physicist finalizing her Ph.D work and about to spend a semester at physics mecca: CERN. She sets out on her retreat from work to her parent’s winter cabin in Aspen where she finds her brother and twenty of his closest friends have crashed her trip, among them (dun dun dun): Abram.

Abram is now a world-famous musician about to embark on tour. We see the characters carefully navigate the emotional landmines left in the wake of what happened between them in Motion. Their relationship as two adults with great success in their respective fields parallels a real world situation many New Adults are navigating today: conflicting careers, conflicting priorities, and being pulled in different directions by your dreams. Both Mona and Abram feel something is missing in their lives despite their success. It’s relatable and relevant to today’s romantic landscapes and something I personally relate to with my husband pursuing his Ph.D in Applied Mathematics as I pursue my career in Network Engineering. I loved it. There are nuances in the story that show us while Mona and Abram are doing great apart, together they bring out the best in each other.

At times, the interactions between Mona and her brother Leo cross the line from dialogue to soap-box author opinion sharing, which I tend to dislike but felt very relevant for the reader to understand the world Mona resides in at work. The dialogue between the siblings highlights real world issues women in positions such as Mona’s face on the regular. It also provides a forum for us to see how Mona has evolved over the last two years when she stands up for herself and what she wants.

With this book, Penny has now connected the Laws of Physics universe to characters across all her book series, either in person, pun, or reference. In Motion, she references Broderick from Rugby, a producer in New York. There is an INCREDIBLY funny reference to Grin and Beard It and the silly author who wrote it. We see Marie from a different perspective and it’s delightful. In Space, she references Abram’s cousin and Abram’s cousin’s friend from Dear Professor series. My favorite of all is the reappearance of Kaitlyn from Elements of Chemistry. It’s extremely clever how Penny approaches this and it is an easter egg of delight for dedicated fans of the Pennyverse. 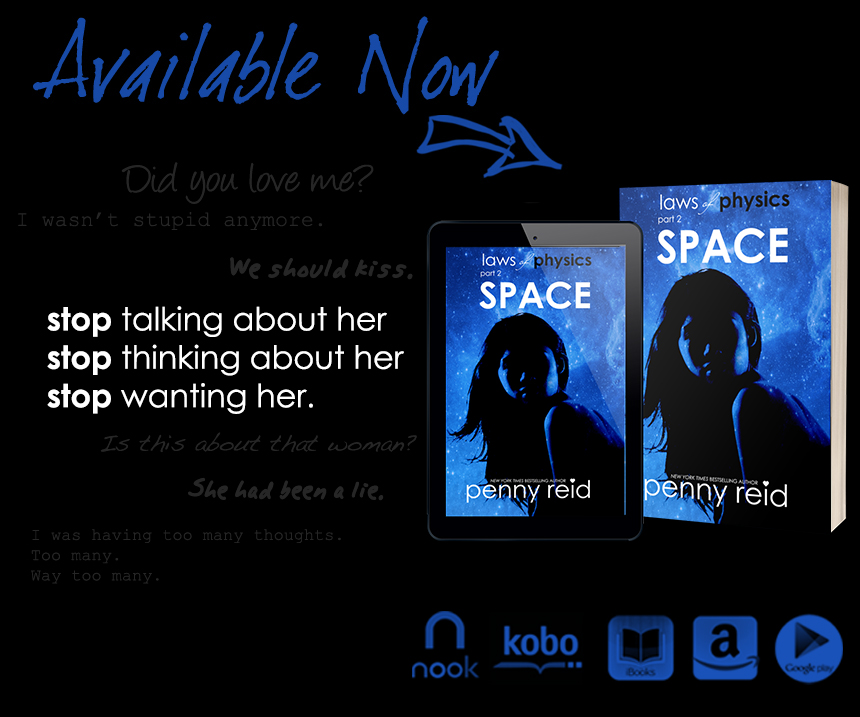 “Hi—hello,” she said, stepping forward but not out of the way, drawing my attention.

She was still staring at me, her face still pale, but her eyes had turned searching instead of stunned.

“I—” She stopped herself, swallowing, her gaze dropping to the front of my coat, a cute little frown furrowing her eyebrows. In the next moment, she was pulling off the glove of her right hand. Abruptly, she shoved the ungloved fingers toward me, returning her eyes to mine. “I’m Mona.”

I suppressed my disbelief at her small action before it could break my outward mask of calm. I wasn’t calm. Just to be clear, I was the opposite of calm.

The fact that she was introducing herself to me now meant that she thought I was too stupid to figure out her lies over the last two-and-a-half-fucking years. She was arguably one of the smartest people in the world, after all. To her, people like me must seem like housebroken pets. So it shouldn’t have surprised me. But it did. The tension and tightness around my ribs reappeared, squeezing uncomfortably.

Dropping my attention to her bare hand, I pressed my lips into a tighter line, dismissing the way my pulse jumped at the sight of her wrist, the olive tone of her skin under the yellow string lights overhead. Glaring at her outstretched offering, I considered telling her to go to hell.

I considered it, but I wouldn’t.

I didn’t trust myself to speak, that was reason number one.

The other reason was harder to explain, or use as a justification, or admit to myself. Staring at her hand, I braced against a sudden flare of hunger. She might consider me a lower life-form, but that didn’t change the fact that I wanted to touch her. I wanted to touch her more than I wanted to tell her to go to hell, and that was fucking pitiful.

But there it was.

Acting on the compulsion, I lifted my right hand and tugged off the ski glove, sliding my warm palm against her much colder one. Her hand felt good in my hand, the right weight, the right size, the right texture, and I inhaled freezing air.

Mona also seemed to suck in a slow but expansive breath as our hands touched, held. This brought my eyes back to hers in time to see her lashes flutter. Pink colored her previously pale cheeks. The sound of the wailing wind, the sting of the air and frost momentarily melted away, leaving just her, her soft skin warming against mine, her beautiful face filling my vision.

She really was. She was stunning. I hated that she was still so beautiful to me.

P.S. You can read Time TWO WEEKS EARLY when you pre-order via AppleBooks! Tell your friends! 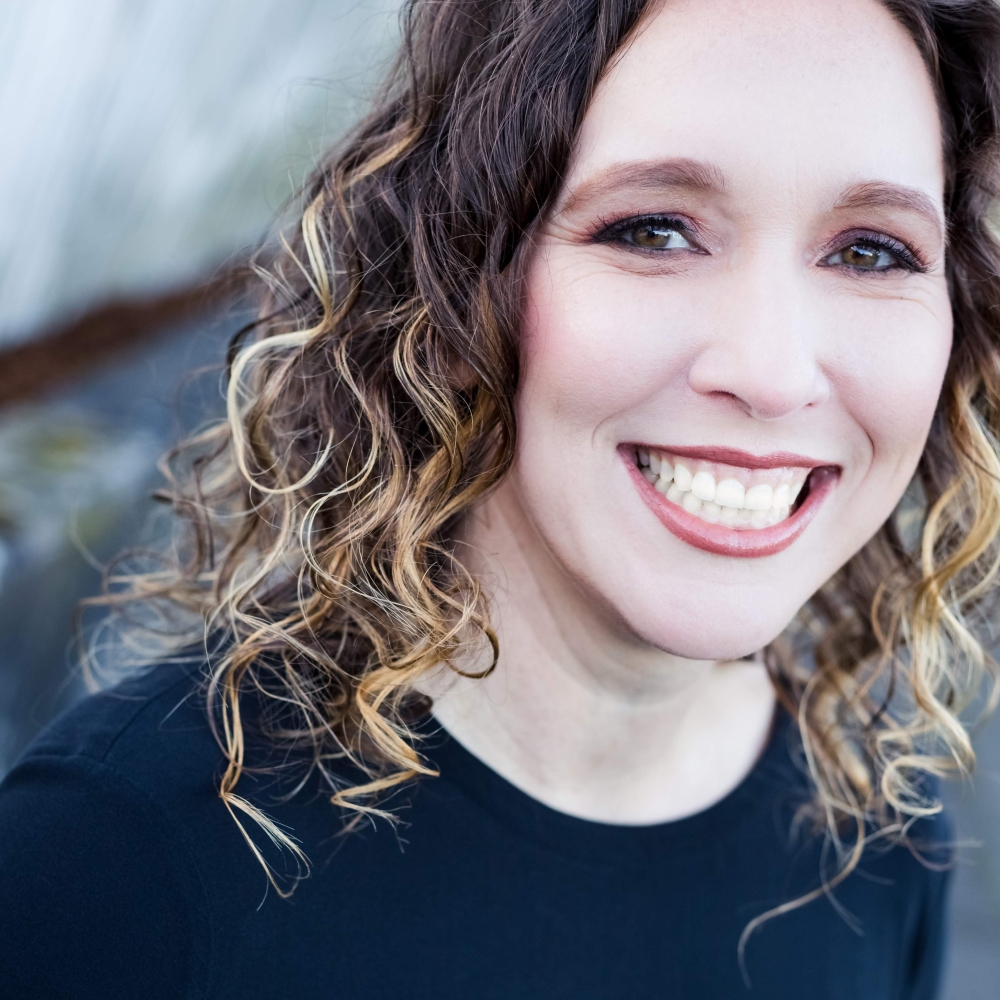