It’s Blog Tour Monday for Stud Muffin, the second release in the Donner Bakery series in the new Smartypants Romance universe, a universe compiled of various authors by my very favorite: Penny Reid.

I’m making this official: Stud Muffin is my favorite of all the new Smartypants Romance universe books to date. Tempest Cassidy is a badass. I loved her fiery spirit and resilience given the circumstances that face her. Cage is the perfect love interest for Tempest.

Stud Muffin is a classic tale of “don’t judge a book by it’s cover” or, more accurately in this case, don’t judge a Tempest by her arrest record. I devoured this book. This was the first book I had read by Jiffy Kate and I loved their characters voices, the pacing of the story, and how Cage empowers Tempest when she is at her personal low and most vulnerable state.

The story starts out with Tempest’s marriage falling apart when she discovers her husband cheating on her and it quickly spirals. Tempest begins acting out her rage in various ways that result in her getting arrested and becoming a black sheep amongst the small town. When she meets Cage, he offers to train her to channel her anger into something more useful and they bond, aka fall in love with a big ol’ heaping of happily ever after (this isn’t a spoiler! It’s a romance so: DUH, there is a happily ever after).

The book intersects the Green Valley we are familiar with in the Pennyverse via the Donner Bakery, where Tempest works as the Duchess of Muffins for Jennifer Sylvester, aka the Banana Cake Queen. The clever muffin of the day recipes had me wishing for some bonus content muffin recipes to try at home because they all sounded that good. Since there weren’t any muffin recipes, I indulged in a second helping of the story instead. 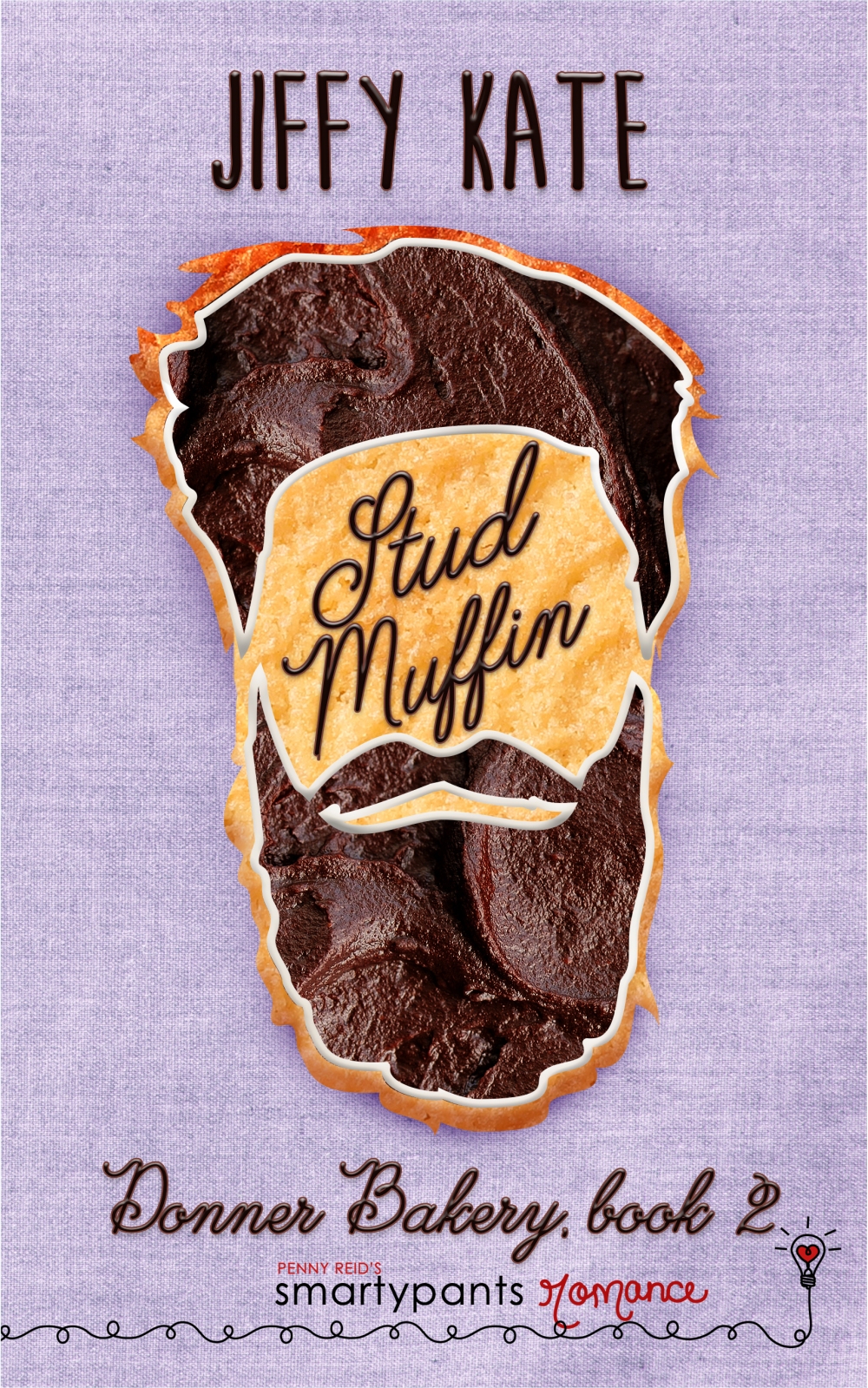 It’s hard to get revenge without getting a rap sheet.

After Tempest Cassidy walks in on her husband banging her high school nemesis, her whole world gets turned upside down. She goes from being known as the Duchess of Muffins to the town crazy. Her new MO: revenge. Eventually, Tempest grows weary being arrested. Yet what choice does she have? If she’s not angry, then she’s simply . . . sad.

But when lines get blurred in the friend zone, will they both get burned? Or will it be a TKO?

‘Stud Muffin’ is a full-length contemporary romantic comedy, can be read as a standalone, and is book#2 in the Donner Bakery series, Green Valley World, Penny Reid Book Universe.

Download your copy today or read FREE in Kindle Unlimited!

As Mindy gets closer, she begins rubbing her hand over her belly, ensuring I know she’s with spawn, I mean, child. How far along is she anyway? The picnic wasn’t that long ago and she didn’t look pregnant then, did she? Maybe she did, but I was too shocked by the ring on her finger to notice? My mother would’ve said something to me when she broke the news about Mindy and Asher being married, so she must not have noticed either.

Maybe she just carries big… and early. Maybe she’s pregnant with multiples. That would be rich—I can’t even get pregnant with one, but Mindy Mitchell, husband stealer extraordinaire, can have my husband and all the babies.

All I know is that I have to stop gawking because Mindy is enjoying this way too much.

“Hey, Tempest. Soup for one, I presume?” Her smile is wide and condescending as she glances at the contents of my shopping cart.

“You know, I’ve been so busy lately that canned soup is all I have time for some nights. It’s not always the healthiest option, with all that sodium, but I’m fortunate to not retain water, like you obviously do.”

Really, Tempest? Is that the best put-down you can think of?

“I’m not bloated, silly.” She laughs, swatting the air in front of her face. “I’m pregnant! Of course, I don’t expect you to notice the difference.”

She’s not worth the jail time.

You don’t look good in orange.

“How far along are you?” I ask, willing myself to stay calm. “Elephants are pregnant, for what, two years?” I know I’m being immature, but I’m using my words and not my fists, so I’m calling it a win.

“Gah, you’re such a bitch. No wonder Asher wanted to leave you. At least I was able to give him what he wanted,” she brags, rubbing her belly even faster than before.

Maybe if she rubs a little more, a fucking genie will pop out, and I can at least get three wishes out of this deal. Wish one: Asher and Mindy disappear off the face of the planet.

“And,” she continues, “because I know it’s driving you crazy, I’ll let you in on the secret. I’m in my third trimester.” She smiles and squeals, like we’re BFFs and she just told me the best news. “Just a couple more months to go and this precious bundle of joy will be in the world… Asher is going to be such a great daddy.”

The blood drains from my face as I do the math in my head. Asher and I have been divorced for almost two months. I found them in bed together three months before that. Two plus three does not equal the amount of months it takes to be in the third trimester. I know my pregnancy facts.

Mindy just answered one of my many burning questions: that sack of shit was cheating on me months before I busted him.

And now, he’s having a baby with someone else.

All I know is I’m trying my damnedest not to lose my shit.

“Believe me,” Mindy says, breaking through the haze I’m in. “I tried and tried to get Asher to leave you before you found out about us on your own, but he didn’t listen.” She sighs, like she’s disappointed for me… like she’s on my side and she was trying to do me a favor. “Oh, well, life goes on, right?”

We enter into a bit of a staring competition for a brief moment, her bright, smiling eyes against my crazy, sadistic glare. I feel the crazy oozing out of me. When she finally starts to back her buggy up to make a U-turn in the aisle, she has the audacity to smile… and wink at me.

She’s the incarnation of Satan.

Asher and Mindy aren’t going to have a bouncing bundle of joy, they’re going to have a devil love child. I should alert the media. This has a horror movie written all over it.

“See you around, Tempest,” she says over her shoulder, before stopping and turning. “Oh, I guess I’ll see you at the reunion, if not before… and you’re bringing a date, right?”

I don’t answer her with words, only with my glare, hoping it burns a hole in her skull.

You can do this.

After she makes a turn onto another aisle, I take a few more deep breaths, willing my nerves to calm, and when that doesn’t work, I close my eyes and try harder. With my hands on my knees, I suck in air like it’s going extinct. My breathing becomes routine and I automatically start swaying my body in preparation for the Tai Chi moves that come next.

Cage has been teaching me a little bit of Tai Chi to further help channel my anger and anxiety and I have to admit, I love it. Completely forgetting where I am, I begin to perform my favorite combination of steps. If people see me, I don’t care. I’d rather them talk about me doing Tai Chi in the canned goods aisle than losing my shit at the Piggly Wiggly.

I’m finally feeling relaxed and in control of my emotions, so to celebrate my victory, I decide to throw a few punches into the air, similar to what Rocky Balboa did after running up all those stairs in the movie.

I am Tempest Cassidy, master of my emotions.

Thoroughly enjoying myself, I decide to end my impromptu workout with a killer roundhouse kick… right into a tower of Pork N Beans.

At first, it’s only a few cans. I lurch out, containing them in a lunge, looking around to see who might’ve witnessed my performance. Only a lady down at the other end of the aisle seems to be in the know. I breathe out a sigh of relief, feeling uncharacteristically lucky as I try to balance the cans and myself.

Just as I decide it’s safe to stand up, I lose my balance and the cans in my hands take a tumble… and then the entire end cap begins to fall.

When everything finally comes to a rest, I’m sprawled out on the glossy tile of the Piggly Wiggly in aisle six, using my body as a dam to stop them from getting too far. I’m afraid to move… afraid to breathe…

Together, they’ve written over twenty stories. Their first published book, Finding Focus, was released in November 2015. Since then, they’ve continued to write what they know–southern settings full of swoony heroes and strong heroines.